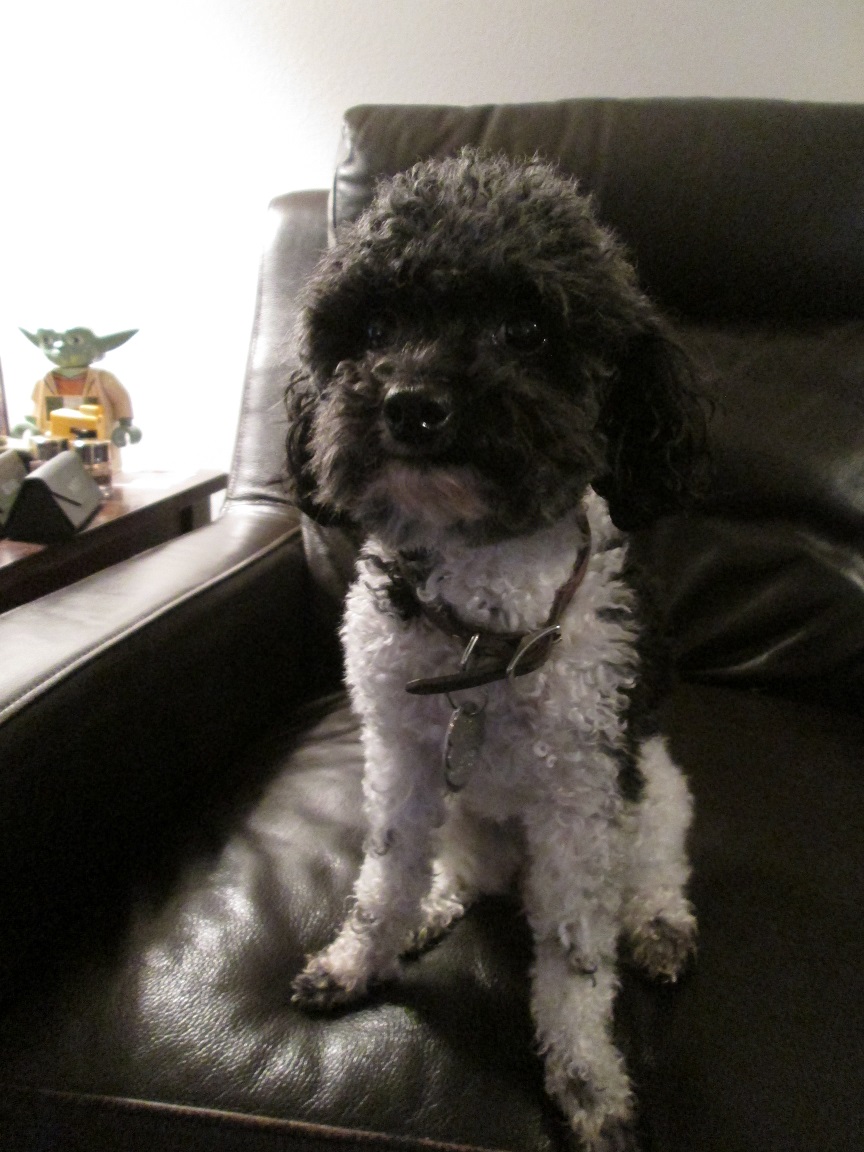 Good afternoon. Gigi the parti poodle here to tell you it has been a spectacular week. My novelist has, under my tutelage of course, published the first book in her Musicology book series which is a comedy satire about reality television. It was a large project this weekend making certain both the Kindle book and the paperback were ready for publication as well as launching the web site. I must tell you the whole experience was a bit trying on the Maltese. We have not been able to go on our walks because he has been a bit under the weather. But he seems to be on the mend now and I look forward to getting out in the sunshine and leading my novelist along with my leash. Without further ado, I am proud to say here is my novelist.

Musicology: Volume One, Baby! is Alive and Kicking on Amazon! My first book in the Musicology series went up on August 11th and is ready to peruse. The book will have a web site that goes along with the book series which will be going live soon. You can preview the website at  http://www.musicologyrocks.wordpress.com/ You can vote for which character you think will win the Musicology crown and other fun things will be added as more of the books are released. The second book in the series Musicology: Volume Two, Kid! will be available this fall. Musicology: Volume One, Baby! is available both as a Kindle book and a paperback. 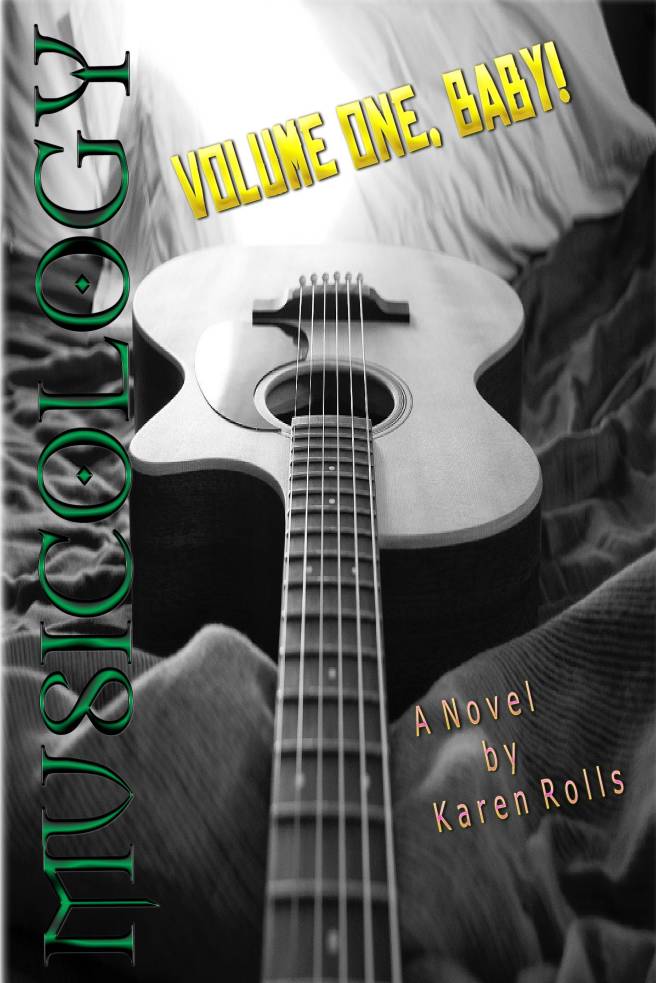 The Musicology series was a whole lot of fun to write. It takes place primarily in Burbank, California and follows the host, two mentors, three judges and the contestants through one season of a reality TV show. The main character Maximillian (Max) Buckner has recently gone through his second divorce and his record label Master Lab Records has filed for bankruptcy. His buddy Devon Daniels the sleazy host of the low rated show Musicology gives him an opportunity to save his label by signing him up to mentor the Circle of Ten, the top ten contestants vying for the prize. The catch is that Devon has also hired a second mentor successful rock and roll diva Ruby Diamonds. Ruby and Max have a lurid past and had a bad romantic breakup when she dumped Max, left his record company and became a huge star.

In addition, Devon has just fired all his judges and hired three new ones, Robbie Sexton, Bonnie Lake and Dick Dandy. Robbie and Bonnie are aging rock stars. Dick Dandy is a comedian who knows nothing about music but because of his sketchy reputation he makes for good television and has been hired on as a judge. Normally Devon would have his three judges tour the country in search of talent. But Devon’s show is in danger of being cancelled. And so, he must bring in a big gun who can recognize the most lucrative talent out there and that is Max. But Devon knows Max has his flaws and he needs someone to accompany him who has a big name who can draw audience and so he hires Ruby to go along for the ride.

The idea in writing an extensive book series about a television show was that movies on the subject only have about two hours to tell a story that includes all the ins and outs of what might happen over the course of a season. And the actual shows themselves like to show the squeaky-clean version of what goes on during the season’s run. In other words, they like to package a family friendly show. My thought was to show all the filthy dirty little secrets that go on both when the cameras are on and when the cameras are off. Everything on the stage and everything in the wings. Everything while it is live and everything that happens when the show is in rehearsal and the escapades that occur when everyone goes home at night. I wanted to get to know the real side of all the participants. I wanted the R rated version and at times the NC-17 version of the show. I wanted the sex, drugs and rock and roll version of reality TV. And so, Musicology was born. And now you can experience it too. Enjoy!

I’ll post every Thursday.  That’s the schedule.  While you’re waiting for my next post check out my novel Chicane currently available on Amazon.

This week’s Free Class Friday from ScreenwritingU is The Best Screenwriting Opportunities During Covid-19. You can sign up for it here.

STREAM OF THE WEEK: AUDRIE AND DAISY & ROLL RED ROLL-Netflix

It is with heavy heart that I recommend the two documentaries Audrie and Daisy and Roll Red Roll. Daisy Coleman, the subject of the Netflix documentary Audrie and Daisy took her life this past week. As you may know rape victims suffer from post-traumatic stress disorder which can lead some victims to suicide.

One of the most telling things about repeat rapists is half of them are psychopathic. This does not apply exclusively to hardened criminals in prison. This applies to campus rapists as well. That means fifty percent of high school boys and college men/boys who repeatedly commit rape are psychopaths too. It is also thought that rapists whether they be the half who are psychopathic or the half that are not may all have abnormal cortical and subcortical white matter integrity in their brain. In other words, rapists may have white matter abnormalities in brain regions that are involved in reward/motivation and moral judgment and are driven by sexual reward.

So, what does that mean about how you should watch these two documentaries? Try this. Psychopaths talk differently than non-psychopaths. When you watch the all the boys in these films, pay close attention to their interviews with the police. In Audrie and Daisy listen especially close to Matthew Barnett as he talks to the detective. Listen for disfluencies when he talks such as “um” and “uh”. Also listen for doubled little words like “the…the”, “and…and” etc. and subordinate conjunctions (because, so that, therefore, etc.). Then listen to the other boys give their account of the rape to the detective. You will hear at least three disfluencies from Matthew. You will hear none from the other two boys.

In Roll Red Roll listen to all the students give their testimony to the police. One of the boys being interviewed is going to stand out like just like Trent Mays does. During his interviews with the police he has a minimum combination of twenty-seven disfluencies, subordinate conjunctions and doubled words in his dialogue. He is also squirmy and twitchy. Psychopaths have a condition called HSS (High Sensation Seeking) which has to do with Monoamine oxidase A which is an enzyme encoded by the MAO-A gene. Part of the issue with having a less active version of this enzyme (which shows up as a normal atrophy in the brain) is it causes a low resting heart rate which is linked to boredom, restlessness, high risk taking and sometimes criminal behavior. Not everyone who has HSS is a psychopath, but all psychopaths have HSS. And at the end of the film you’re going to find out why this boy stands out.

It is also important to pay attention to the difference between the way Trent Mays gives his statement in the courtroom scene and the way Ma’lik Richmond gives his statement.  Trent’s texts to Jane Doe are also telling. He has no problem lying and manipulating her when she involves the police. And listen carefully to how Lead Special Prosecutor Marianna Hemmeter describes Trent Mays and his actions.

Pay close attention to both Matthew and Trent’s eyebrows. Narcissists tend to have darker, thicker more distinctive eyebrows. Not all narcissists are psychopaths, but all psychopaths are narcissists. When you watch these films, you could see their eyebrows from outer space. If you want a good example of a rapist psychopath with prominent eyebrows look at Jeffery Epstein and Ted Bundy.

Also listen to what the boys talk about either verbally or through text messages. Do they seem to focus on food, sex, money or all three? Non-psychopathic people have two layers. The first one is food, sex, and money. The second is family, spirituality, and religion (also love.). Psychopaths only have the first layer. All they care about is sex, food, and money or in other words material things. And without science or divine intervention they will never ever care about anything else.

Smart Films for Smart Kids: WHERE THE LILIES BLOOM-Amazon Prime

I am proud to choose this film for kids this week. Where The Lilies Bloom is a wonderful story about an extraordinarily strong girl. Based on the novel by Bill and Vera Cleaver it’s the story of fourteen-year-old Mary Call (played beautifully by Julie Gholson), the second eldest child of four who lives with her father in the great Smokey Mountains. But after the death of their mother their father also falls ill. Before he dies Mary Call’s father makes her promise to keep the family together and not let the oldest child Devola (a young Jan Smithers of WKRP fame) marry their land owner Kiser Pease (the wonderful Harry Dean Stanton). Mary Call is determined to keep their father’s death a secret no matter how grueling the task becomes.  This film is more than a must see. It is required viewing.